Ipsos takes over Synthesio to strengthen itself in terms of social listening.

The Group, which specialises in opinion polls, is putting more than 50 million dollars on the table to acquire the company specialising in social network data analysis.

Ipsos is going to inject some new blood into its model. The Group has completed the acquisition of Synthesio, a French start-up specialising in social network and e-reputation monitoring, which carries out the majority of its activity internationally, especially in the United States. The amount of the transaction is more than 50 million dollars (in cash). Ipsos is therefore acquiring a 100% stake. Synthesio’s investors included the Idinvest and Entrepreneur Venture funds, as well as bpifrance.

“Ipsos was one of our clients. Over the course of the year, they were interested in making an acquisition and the offer came at a time when we were considering several possibilities, such as a new fundraiser, an initial public offering, etc.” says Loïc Moisand, co-founder of Synthesio, who has been living in New York for six years and will return to France after the transaction.

As the market for IPOs wasn’t very favourable, the Ipsos project eventually convinced the management team. “Our offers are complementary, the company will continue to exist independently, the brand remains, as do the teams and the management. There has been a lot of consolidation recently and it is becoming increasingly difficult to remain independent in this market, continues Loïc Moisand. Joining a large group was the best solution.”

Two of Synthesio’s main competitors, Brandwatch (UK) and Crimson Exagon (USA), merged a few weeks ago. As for Mention (FRA), it was taken over by Mynewsdesk (SWE).

For Ipsos, it’s a question of seeking growth in businesses that are losing momentum. In the first nine months of the year, the Group recorded a drop in turnover of 4.3%. It will rely on Synthesio to provide its customers with offers combining traditional opinion polls and analysis of the data published on social networks.

Synthesio, which was created in 2006, has 130 employees, including some fifty in France, as well as many engineers and data scientists. The company has offices in France, New York, London, Singapore and Brussels (since the acquisition of Belgian company Social Karma last year). It achieves half of its turnover in the United States, compared to approximately 15% in mainland France. It has significantly diversified its customer base from Nasdaq to Toyota, from L’Oréal to Kering, MasterCard Incorporated and Shell.

This international presence is shared by Ipsos, for which the Europe, Middle East and Africa region accounts for only 44% of revenues, 36% for America, and 20% for Asia-Pacific, the only growth region. The Group has recently increased its presence in India and China. But it has experienced economic difficulties in North America in recent months: Synthesio’s dynamism in the continent could help it find sources of growth. “The takeover of Synthesio is part of our “Total understanding” project and its targeted acquisition objectives. This will enhance Ipsos’ technologies, our knowledge of social media monitoring and our management of data from social media” said Ipsos CEO, Didier Truchot, in a statement. 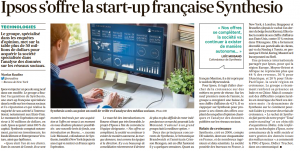