The uncertainty that remains regarding the future shareholding of the Chantiers de l’Atlantique is not an obstacle to the shipbuilder’s prosperity. The takeover by Fincantieri is taking a bit of time. The controversial transfer of 50% of shares and then the loan of 1% to the Italian group is slowed down by the European Commission that wonders whether the operation will not “be detrimental to competition at the European and global levels”. The Germans protect their own shipyards. Bruno Le Maire, Minister of Economy, is optimistic. He said on Friday in a Franco-Italian forum in Versailles that “the merger will happen because we want it, because it is in our interest”

The wait has however not ruined the atmosphere that was bright on Wednesday 27 February in Saint-Nazaire, on the occasion of the ceremony of delivery to the Italian-Swiss shipowner MSC of the “Bellissima”, a liner of 315 meters long, with the capacity to transport 5 700 passengers. Earlier in the morning, the traditional piece of gold was wielded on the hull of the “Virtuosa”, a replica of the first, to be delivered at the end of 2020.

This Italian series will not be stopping anytime soon. MSC, which already had 14 of its 16 liners in Saint-Nazaire, ordered five other cruise ships at the Chantiers and two more, as an option, should be added to the order book by 2026. The shipowner, firmly rooted in the European cruise market, reasserts its strong ambitions regarding the American and Chinese markets, for which the “Bellissima” is intended.

The Chantiers de l’Atlantique also intends to build five more ships, deliverable between 2020 and 2023, for the American group Royal Caribbean Cruise Line and its subsidiaries. A sixth copy of the “Oasis” series has just been confirmed. With its 362 meters and a capacity of 6 700 passengers, it is in the same category as “Harmony of the Seas” and “Symphonie of the Seas”, the largest liners in the world. What is more, an additional “Edge” type ship for Celebrity Cruise, another branch of RCCL, is in the pipeline.

Four constructions at once

Saint-Nazaire is therefore “the place in world where the most liners are built” according to Laurent Castaing, the Managing Director of Chantiers de l’Atlantique. The company must also manage the incredible complexity of building four ships up front, at various stages. And among these ten liners, it will be necessary to find gaps for four Auxiliary Oiler Replenishment vessels for the French Navy, to be built between 2022 and 2029. Each day, 3 000 employees and 5 000 people working for the subcontracting companies enter the gates of the shipyard, that were conveniently expanded last year. In order to keep up with the pace, the company must recruit 200 persons this year and 150 per year for the following years, a daunting task in view of the shortage of available labour. 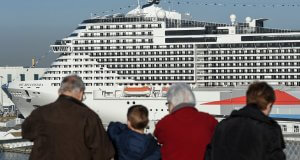